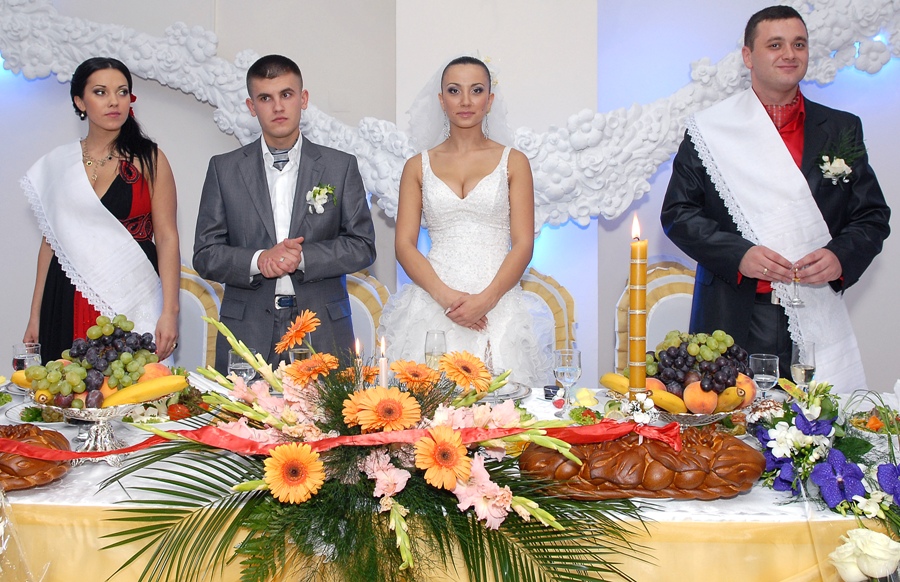 The most important aspects of human life, the most prominent ceremonies and spiritual rites are associated with a family and its members.

Family cycle of life include three significant stages: wedding, birth and funeral. Each family honors and observes a lot of relevant rites together with all members of the society.

For the people living between the Prut and the Dniester Christian religion plays a great part. That’s why religious people believe that each of these three events (choice of the spouse, birth of a child or death) is predetermined by the almighty and kind God. This fact symbolizes the humbling, obedience and sanity in all aspects of life of a human-being. All the rites over the course of history involved enormous number of customs and traditions, believes and superstitions, some of which have been lost in time or as we say ‘espoused means lost’.

It’s important to underline that as ethnographical studies prove the celebration of these holidays show a lot of registered variations among the people settling in the area between the Prut and the Dniester, major part of which depends on the region. These ceremonies are observed targeting the same goals everywhere, even if the form of celebration is different and subordinates to plenty of circumstances.

The Wedding rites include series of customs and ceremonies classified as pre-wedding, wedding and post-wedding.

The purpose of pre-wedding phase is to ensure the correct choice, the final decision to tie the lives of two young people, which is carefully thought out, weighed and tested by means of folk customs. The traditions observed on this stage include courtship, engagement, response, agreement on the way of wedding ceremony and other customs crowned by wedding finally.

The foundation for all of these traditions is the goal of creating a strong and happy family for whole life, where wife and husband support each other in difficult times, share all sorrows and joys together.

Another purpose of the family creation is blood reproduction. Children are the successors of the family and the name, heirs of cultural and material values, they support the parents when they get old. Those are children, who should follow their parents to their graves and commemorate them in Christian traditions. As for the wedding, it is obvious that after getting married the girl loses certain priorities (family name, belonging to the family, etc.) and the guy only acquires his wife. Some details can be added to the system of marital customs, for example, the clothes for single young men and girls differ from the clothing worn after the wedding. These and other rules are necessarily met with a change in marital status.

The system of rituals and family events includes holidays devoted to the period of adolescence, such as holidays associated with children and parents’ dates of birth.

Another important ritual is associated with the birth of a child and the celebration ceremony, which is the natural crown of the wedding ceremony. It is a well known proverb saying that “the joy and richness of people are concentrated in their children”; we also believe that for every state “people and their health is the dearest property and wealth”.

Customs and beliefs associated with the rite of birth also include a complex system of superstition, norms, and customs such as period of pregnancy, giving birth to a child and the celebration of his setting foot into this world, the christening in presence of godparents, the celebration of the christening and giving kolaches and fabrics to the godparents as a symbol of kinship, period of raising up a child between the christening and age of one year, further observance of certain customs (first tooth, haircut, weaning, etc.).

A huge number of superstitions and beliefs, norms, and local customs are related to the third family ritual of a death of the person.

As well as two other important stages of life (marriage, birth) funeral rite has its purpose, as well as a series of superstitions and beliefs. There are omens foretelling the death of a family member: dreams, howling of dogs, singing of cuckoos or chickens, falling of icons, etc. After a person dies there is a number of rules: bathing, dressing, cleaning the house, preparing for the burial, mourning, memorial tables and other traditions associated with the cult of the ancestors.

The unexpected death of young people in particular brings elements of the wedding ceremony to the funeral ritual (bride and groom's clothes, wedding bands and flowers). We should note that the superstition associated with a human death contain many archaic elements, regionalisms and local aspects of the funeral process.