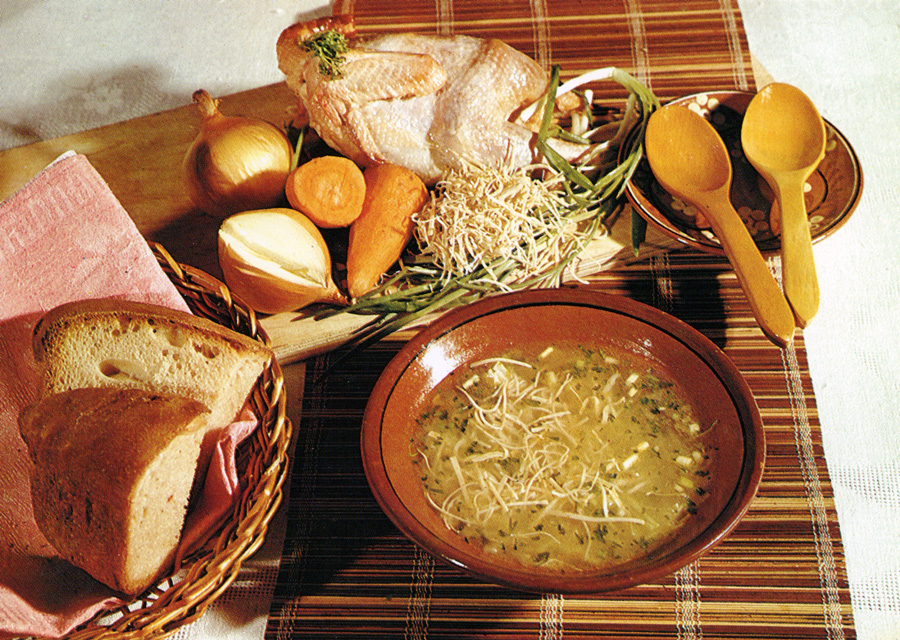 In the process of society’s development the relationships between the generations have changed; many old customs are preserved while others have disappeared, and some of them have changed their contents. Among the ancient traditions that proved viable there are customs and traditions deeply rooted in the history and culture of the nation.

Traditional cuisine is tightly connected with the particular way of life, culture, profession and employment. It is one of the important cultural areas, which embody all distinctive features of the nation. As a rule, national cuisine traditions represent nation more than anything else, in the first place due to the ethnic continuity. At the same time, the cuisine is susceptible to changes and emerging innovations. Despite this, the national cuisine is less prone to standardization. It usually reflects the traditional tastes that have been formed for many generations, but no less important is the fact that an intensive process of mutual enrichment of cultures takes place here as well, with today’s catering contributing significantly to it.

In the national cuisine, a certain link explaining the past through the present can be traced between the experiences of people living in different times can be traced.

At the same time, it should be noted that every era brings new types of food products, as well as experience, and vintage elements become intertwined with innovation. In contrast to other elements of material culture, the borrowings do not infringe on national cuisine, but on the contrary, they are assimilated and enrich it.

The Moldavian rich economic and trade relations have increased the diversity of food products and contributed to the emergence of innovations in cooking; this was largely due to the influence of European and Oriental cuisine.

Thanks to trade relations with the Ottoman Empire back in the XVIII century, a certain influence of Eastern cuisine was evident in our ancestors’ nutrition. Many Eastern dishes came into sight during the reign of the Phanariotes who brought personal chefs with them.

This explains the presence in our cuisine specific eastern dishes, such as rice, moussaka, chigir, meat with fruit, baklava, etc.

The traditional Moldavian cuisine also adopted and assimilated some national dishes that are typical of other nations: borscht from Russian cuisine, some salads from the east, steak from Austrian cuisine, scallop, mayonnaise, and soufflés from the French, etc. All these influences are particularly visible in the catering and, to a lesser extent, in traditional cooking. The Moldavians always managed to borrow from foreign cuisines only the most delicious and best recipes, adapting them to their liking, while maintaining the characteristics of their national cuisine.

In the nutrition culture of Moldova there are regional differences, depending on the demographic structure of the population, natural environment and employment of rural residents. As for the south of the country, here we find traces of ethnic minorities’ cooking traditions influence (lamb dishes, fish, vegetables, wine, etc.), while dishes of pork, poultry, fruit, vodka and, to a lesser degree, wine prevail in the north.

A wide variety of methods of cooking tasty and healthy food is known today.

Modern technologies for long-term storage of products (sterilization, freezing, drying, etc.) have been developed. Thanks to these new technologies, the diet became enriched with frozen meat, fish, vegetables, fruits, etc., allowing more variety throughout the year. In order to preserve the traditional Moldavian dishes in the catering menus, a special support and promotion among the consumers, particularly among young people is needed.

Of the utmost importance is the necessity to convey to the public the value of traditional recipes in terms of health and environment. Due to the industrialization and globalization of food products, there is a danger that traditional cuisine will keep going into oblivion. One of the reasons is the lack of appropriate education about nutrition among young people.

At the same time, there is a growing trend of increasing interest in the ethnic cuisine. In this regard, special attention should be given to nation’s specifics of nutrition, to our cuisine’s age-old traditions as a cultural phenomenon, to our heritage’s research, and to the development of rural tourism.